Vi at The Glen residents Ron and Cynthia Holmberg both attended Hirsch High School on Chicago’s South Side, but never met until they were both students at Indiana’s DePauw University.

Now married 60 years, the Holmbergs have come full circle by giving Chicago students a scholarship to attend the university where they first met.

Ron and Cynthia met while working the same booth at a fraternity-sorority charity event at DePauw University. Cynthia was a sophomore and Ron a senior, attending DePauw on a full scholarship. After chatting about growing up in Chicago for a while, Ron asked Cynthia if she’d like to go get a Coke. To his surprise, she said no. “I didn’t like Coke!” said Cynthia. “But then I thought, ‘Wait a minute dummy, he’s asking you out.’ So then I said yes and I actually choked down a Coke!”

After Ron graduated, he returned to Chicago to work as an actuary, but still made visits to DePauw every weekend to see his sweetheart. In 1955 Ron was drafted into the Army, and a year later Cynthia graduated and the two were married. They lived in Aberdeen, Md. where Ron was stationed and Cynthia taught third grade.

But the couple decided to return home to Chicago and eventually start a family.

Ringing a Bell for the Salvation Army

Throughout their six decades together, the Holmbergs have always been philanthropists -- whether it’s donating to their alma mater, or raising money for the Salvation Army.

“I was on the advisory board of the Salvation Army Chicago Metropolitan Division, and one year I asked why they didn’t have bell ringers at the Wilmette Train Station,” Ron said. “I was told they were having trouble finding volunteers for that location, so I said, ‘Give me a bell, a kettle and an apron and I’ll go try it.’”

For the next ten years, Ron and Cynthia stood outside the Wilmette Train Station on cold December mornings, ringing a bell to collect money on behalf of the Salvation Army. “We alternated days,” said Cynthia. “One day he went and I fixed him a nice hot breakfast and the next day I went and he fixed me a nice hot breakfast.”

One morning, Ron got the idea to set a collection goal and hang a sign up that said “The Holmberg family will match your donations today.” The contributions skyrocketed. “No one knew who the Holmbergs were,” laughed Ron, “but it just caught on and everyone wanted to know if we reached our goal.”

In total, the Holmbergs said they raised nearly $150,000 for the Salvation Army over ten years.

Creating a Scholarship for Chicago Students

As the couple shifted into retirement and began estate planning, they decided to set up a scholarship to fund educational opportunities for students with significant financial need.

“Ron was the recipient of a scholarship,” said Cynthia, “so we thought it would be nice to give that same opportunity to others.” As for where to endow the scholarship, that was an easy decision. “We thought, why not start at DePauw where we started,” said Ron.

They reached out to DePauw and established the Ronald K. and Cynthia Brooks Holmberg Scholarship. DePauw selects the recipients annually, as long as the students are in financial need and graduate from a school located in Chicago.

The scholarship has helped fund the college education of 20 students so far. Half have received their master’s degrees, a few have received doctorates, and their careers include attorneys, teachers and social workers.

Moving into Vi at The Glen

In 2011, the Holmbergs decided it was time to look into a retirement community. Just like on their first date, Cynthia was skeptical. She had lived in, and loved, her home in Wilmette for 40 years. “I said, ‘I have a baby grand piano and I’m not moving anywhere that it won’t fit!’”

The Holmbergs made a paper cutout of the piano size and brought it into one of Vi at The Glen’s Villas. When she saw that it would fit, Cynthia agreed to make the move.

“Two days after moving in, we were sitting on our patio having coffee, looking out at the garden, and we turned to each other and said ‘do you miss the old house?’ Neither of us did after living there 40 years.”
✕
Thank you
Thank you for filling out the survey. You may close this window 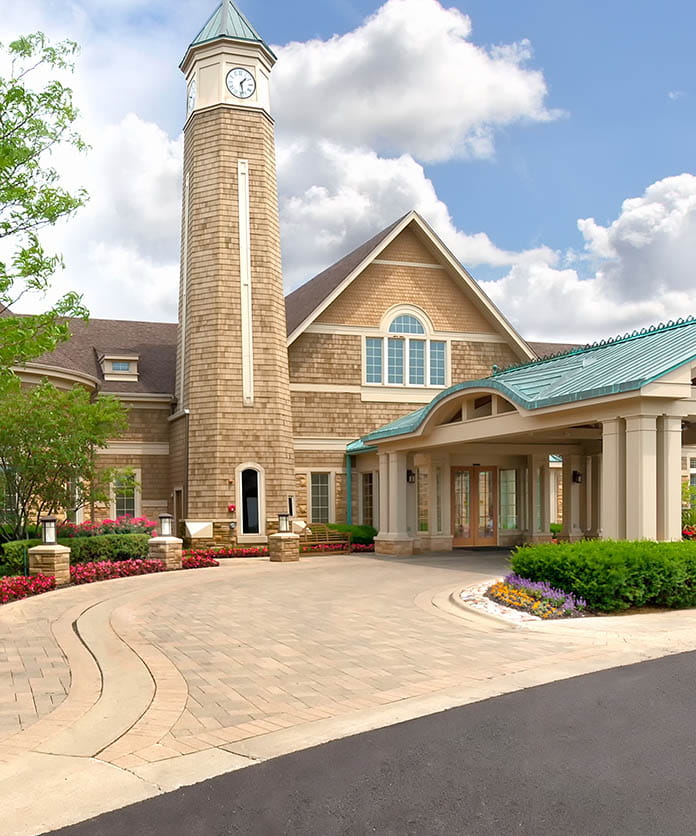