More resident stories
Open Close
Trivia at Vi at The Glen
Fun is the name of the game for Vi at The Glen’s pickleball pioneers
Empowerment and connection with improv
Vi at The Glen's community garden gives residents the space to grow
Welcome to the neighborhood: Villas at Vi at the Glen
Vi at The Glen residents' philanthropy helps Chicagoans in need
“The wonderful part about this improv group is that we laugh with each other, not at each other.” 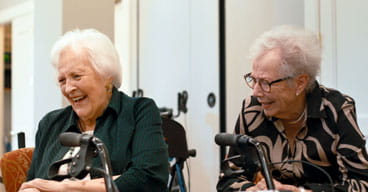 Resident Karyl Golden remembers clearly the first time she decided to participate in improv at Vi at The Glen, a lifestyle program supported by the community.

“I had no experience,” she says, laughing. “I walked in, put my brain at the door, opened my mouth and waited to see what came out.”

Now, five years later, she still declares it “the happiest hour of my week, every week.” 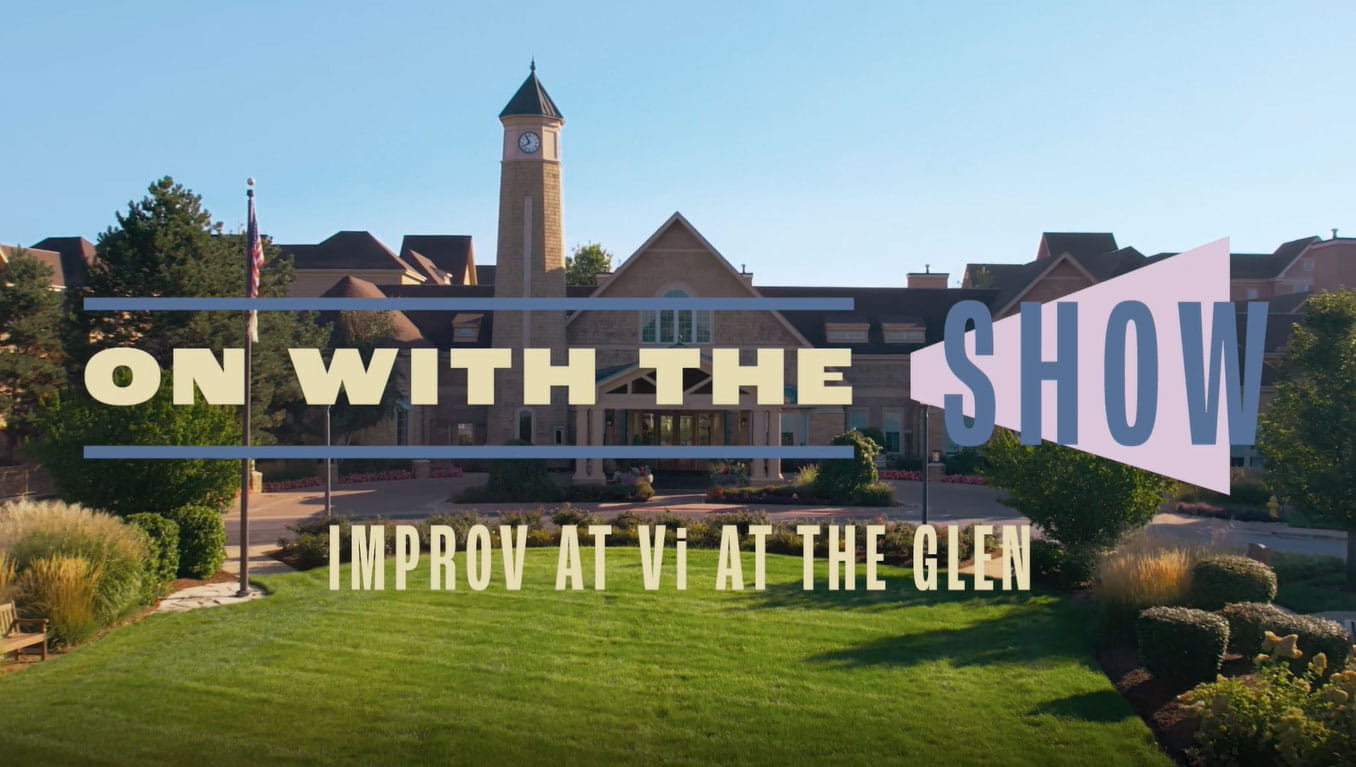 Though improvisational theatre has been around for centuries, modern American improv was born in Chicago with a group called The Compass Players in 1955, which explored extemporaneous performance through improvised plays. This gave rise to a new theatre company, The Second City, known for jumpstarting the impressive careers of comedians like Gilda Radner, Harold Ramis, Eugene Levy, and Bill Murray.

Twenty miles north at Vi at The Glen, 14 resident improvisers and friends gather weekly with Beth Barber, the group leader of 16 years, to play improv games, explore fresh scenarios, build characters and, most importantly, share laughs. Sometimes, the group benefits from guests dropping by, including Second City mainstay Norm Holly, who recently came to offer a master class. No matter the makeup, the improvisers are sure to have fun together.

“We laugh a lot because it’s a funny group,” says resident and improviser Jackie Kopp. “But the wonderful part about this improv group is that we laugh with each other, not at each other. We have people who have an astounding sense of humor.”

The rule is, there are no rules!

Weekly meetings start with Barber leading a series of games for the community to warm up. Games include such staples as “Bus Stop,” in which two characters find each other on a bench waiting for a bus, and “The Alphabet Game,” in which performers tell stories beginning with consecutive letters of the alphabet. The games serve as open-ended opportunities for residents to connect with each other, explore new imaginary spaces and freely develop their comedic chops.

Residents from all walks of life find enjoyment and connection in leaning in to having fun.

As Vi at The Glen resident and 10-year veteran performer Mike Weil says, “We’re all friends. Life is easy here. It is very easy to work with this group.”

The freedom to be foolish, lighthearted and exploratory makes the games and scenes a group favorite. “These games involve listening, using your brain and using your imagination,” Ms. Kopp says, “and I love it. I really do.”

When not performing during their improv classes, members of the group enjoy cheering each other on from seats in the audience—often joined by family, friends and fellow Vi at The Glen residents who stay to watch the group practice. “It’s just as much fun to watch the other people as to do it yourself,” says Ms. Golden. Mr. Weil agrees. “It’s always a joy,” he says.

One of the benefits of being in the audience is being able to shout out extemporaneous suggestions for performers—a person, place or activity on which performers can base their scene.

“I’m kind of free swimming,” Weil says of his suggestions—and that’s the whole point. The group delights in responding to off-the-wall suggestions and creating characters and scenarios that are fresh and unexpected.

A place for all

Improv has long been a form that lends itself to accessibility—after all, anyone, regardless of their physical form, can be anything in improv: an Olympian, a politician, a six-year-old, a criminal mastermind, a polyglot or a potted plant. So for this group, improv is a space that transcends physical challenges that may exist in the real world.

As long-time performer and Vi resident Mary Torgerson says, “My friends who use walkers or have breathing problems...they’re up there on stage having a wonderful time! It’s just great.”

It’s a group open to anyone with an interest in comedy, friends and connectedness. The result is a group marked by profound joy. As Ms. Golden remarks, “The whole group are new friends…when I’m in improv, I’m happiest.”