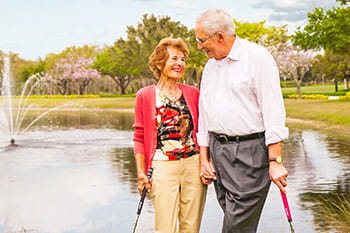 “He nearly ran me over one day with his golf cart,” Shirley said. “He came belting out of his parking space, didn’t look and there I was. He screeched to a halt.”

What could have been a catastrophic first meeting  instead led to love. Blanchard, 85, moved to Vi at Bentley Village in 2011, and Cedarblade, 83, moved to the community in 2013. They lived in the same building at the community, ran into each other frequently, and began dating in 2015. The couple decided to marry later that year. Blanchard, who originally moved to the community with his second wife Phyllis who passed away in 2014, was hesitant to fall in love again.

“When you lose a spouse, a little bit of you dies too,” Gene said. “Shirley and I had gone through it twice, and neither of us were anxious to go through that a third time. But in the end — what do they say — ‘Love conquers all.’ And that’s what it was. I don’t know that there was any particular event that changed either of our minds. We fell in love despite ourselves.”

Shirley, who had been widowed for 23 years, wasn’t sure she would marry again. Yet, she and Gene approached dating – and then marriage – with open eyes.

“Never in a million years was I ever going to get married again,” she said. “I was very happy in my other marriages, so I wasn’t taking any chances. I think he must have secret powers of persuasion.”

The wedding
They had already been seeing each other for a few months when they decided to get married. They saw no reason to wait for the wedding.

“It was about six weeks between the proposal and the wedding,” Gene said. “At our age, days count.”

The couple married on December 31, 2015. The wedding was small, just the couple and the pastor.

Life together at Vi at Bentley Village
Today, the newlyweds are settling into their routines together at Bentley Village. The duo are involved in a number of community activities – Gene is the president of the resident council, and Shirley is vice president of the women’s golf association that boasts more than 100 women in the group. The couple hope once things slow down they might finally take a honeymoon, but for now, they’re focused on moving in together.

“I’m hoping it’s the last move I ever do!” Shirley said.