For Adrian Nunez Felix, the dream of medical school is a reality 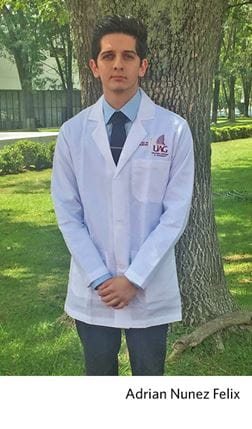 In August 2016, Adrian Nunez Felix, a longtime Vi at Grayhawk, a Vi and Plaza Companies community employee, stepped onto a stage in Guadalajara, Mexico, to take part in the white coat ceremony that would officially christen him as a student at the Universidad Autónoma de Guadalajara (UAG) School of Medicine.

On that day, Felix took the Hippocratic Oath with his fellow students — all of them wearing the white coats they’d just been issued — and he was overcome with emotion. “I’ve had this dream for so, so long,” he said. “I feel like everything has led up to this perfect moment where I finally reached what I wanted.”

And that perfect moment was due in large part to scholarship assistance he’s received over the past five years from the Grayhawk Classic Residents’ Foundation, a 13-year old non-profit group that awards scholarships to Vi at Grayhawk employees and their dependent children.

Felix, who worked at Grayhawk for five years, first as a valet and later as a concierge, says he discovered his interest in senior living, as well as his chosen career path in medicine, thanks to a relationship with a beloved relative. When Felix was a junior in high school, his great-grandfather was diagnosed with bone-marrow cancer.

“We never expected that to happen to such a strong man,” Felix said. “He was honorable, honest, hardworking and wise — the most perfect example of a human being I’ve ever known.”

Felix and his great-grandfather spent as much time together as possible, with Felix keeping him company and helping to make him comfortable during his treatment

On Father’s Day in 2009, the entire family got together to celebrate, knowing their loved one might not have much time left. “He told me he’d regret not seeing me get into medical school,” Felix said.

Traveling The Road To Guadalajara

Even with the help of the scholarships from Vi at Grayhawk residents, Felix’s road to get into medical school in Guadalajara was a rocky one.

In 2015, he applied to 16 medical schools — UAG was not among them — and spent about $5,000 on testing and application fees. He was prepared, with good recommendations, good grades and MCAT scores — but the competition was steep.

Rejection was frustrating, he says, but Felix wasn’t deterred. Instead of taking a break, he decided to get his master’s in biomedical diagnostics. After earning his master's degree, he applied for medical school in Guadalajara and was accepted at long last.

Embracing Employees As Part Of The Family

Catherine Covert, a foundation board member who has lived at Vi at Grayhawk since late 2010, says the foundation makes an effort to help every scholarship applicant with at least some money toward their education. Hopeful students fill out an application each year, write an essay on their academic goals and interview with a board of foundation members before being awarded a scholarship.

According to Covert, the mission of the foundation is to help Vi at Grayhawk employees and their dependents pursue higher education. For residents, the desire to contribute to these scholarships extends far beyond donating money.

“For many of us at Vi at Grayhawk, we see the young employees, and the children of the employees, as an extension of our own families,” Covert said.

On Felix’s last day at Vi before leaving for Guadalajara, about 100 residents came down to the lobby, led by one holding a trombone. Before he knew what was happening, the residents started applauding and serenading him during his shift at the concierge desk.

“It was one of the most beautiful moments of my life,” he said. “Throughout my years at Vi, I’ve always felt appreciated — but at that moment, it wasn’t appreciation, it was real love.”

He says the love and support of Vi at Grayhawk’s residents will fuel him, no matter how challenging medical school gets. Though he isn’t sure what his medical specialty will be, Felix knows without a doubt why he’s studying medicine.

“I know my medical degree will help me to become financially secure, but I’m not doing it for the money,” Felix said. “My goal has always been simply to improve people’s quality of life.”