The latest on COVID-19 from Vi
Learn More
Meet the Residents
Meet the Residents
More from this series
Open Close
Outdoor fitness with Laura Ensign
Hike the trails with the Vi at Grayhawk hiking club
Fishing for adventures with Carol Burdick
A romance by air, sea, and land
Meet former Scottsdale City Councilman Wayne Ecton
Mastering mindfulness with residents Bill and Jean Tiller
Carving out a new life at Vi at Grayhawk
For the Jennings, volunteering with pets bring them home

Carving Out A New Life At Vi At Grayhawk 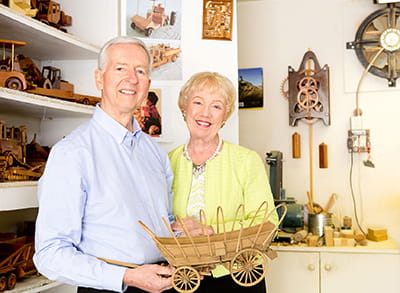 If it weren’t for a couple of friendly neighbors, David and Pat Sauer may never have met.

It was New Year’s Eve in 1983, and David Sauer, a lifelong bachelor, was headed to a party hosted by new friends. Also en route: a lovely young widow named Pat, who was also friends with the host couple. The “party” was actually a ruse concocted by their matchmaking friends.

“They were yentas!” Pat said.

At around 7:30 p.m., when their friends finally unveiled there were no additional guests coming to the party, David and Pat gave in and resolved to enjoy their first date. Today, more than 30 years later, the couple still laughs about that first date.

“When we decided we were going to get married, we called those friends to tell them their plan had worked — and sure enough, they asked for a finder’s fee!” Pat said.

Building Their Life Together

The Sauers met later in life, years after Pat’s first husband died — they’d both built lives of their own, which they merged throughout their relationship of more than 30 years.
David spent most of his life farming the North Dakota homestead his grandfather established in the late 1800s. He and his two brothers built the family farming business together, raising and fattening purebred cattle, and growing wheat, sunflowers, barley and soybeans.

Pat grew up in Texas; she met her late husband, an Episcopalian priest, while she was volunteering at St. Luke’s Hospital in Houston (he was the hospital chaplain). Getting to know people and making new friends was a huge part of Pat’s life — between the built-in social responsibilities of being married to a minister, and her career in public relations for Duchesne Academy of the Sacred Heart in Houston.

Once David and Pat were married, they decided to split their time together between the two states they loved – summers in David’s home state of North Dakota, and winters in Arizona, where they met. “The winters are much nicer in Arizona,” David said.

David continued to work with his brothers until the business had grown so big that they no longer wanted to manage it. “We decided, ‘There’s more to life than 15-hour work days,’ so we retired,” David said. Once retired from his farming career, he took up woodworking — a life spent working with his hands meant David wasn’t interested in being idle.

“I’m not one to sit down and watch TV, and golf didn’t really excite me either,” he said. “All I really wanted to do was get in my garage and tinker!”

After many years spent shuttling between two states in their retirement, the Sauers made the difficult decision to part with one of their homes. But their next decision was easier to make: The Sauers knew Vi at Grayhawk, a Vi and Plaza companies community, was the right choice for them.

“We watched Grayhawk being built,” David said. “We knew this was where we wanted to live — we looked at other places, but we were never really serious about any of them."

They moved into their new home at Vi in 2013. It was a big adjustment, as they had lived in homes with multi-car garages for most of their married life. A garage was especially important to David; he needed plenty of room for his woodworking craft.

As soon as they got the call from the Sales Office that a garage had become available, they jumped at the chance and pulled the trigger on joining the community.

It’s not all tinkering alone in the garage, though. David and Pat are involved in many activities around the community.

Never one to turn down an opportunity to work, David’s farming expertise made him a shoo-in as chairman of the buildings and grounds committee. “Getting involved is just one of the things you do to get to know the family of people who live here — we want to be part of it all.”

Pat serves on Vi at Grayhawk’s art committee. She puts her gregarious personality and public relations skills to work every month curating a special curio cabinet exhibit at the community. She’s featured traditional Asian art, Valentine’s Day–themed art, Lalique crystal, and more in the cabinet; most recently, she put together an heirloom collection of Jewish art from generous residents.

The couple has traveled all over the world during their years together, and they still love to travel — especially during Phoenix’s hot summer months — but overall, the Sauers are happy staying right where they are. Pat says building friendships with fellow residents is the most important part of their life in the community.

“When you move here, you know you’re going to stay here — you know these are the people that you’re going to be living with for the rest of your life,” Pat said. “So you just sit down and you share your story, and other residents share their amazing stories in turn. That’s how friendships begin.”

✕
Thank you
Thank you for filling out the survey. You may close this window. 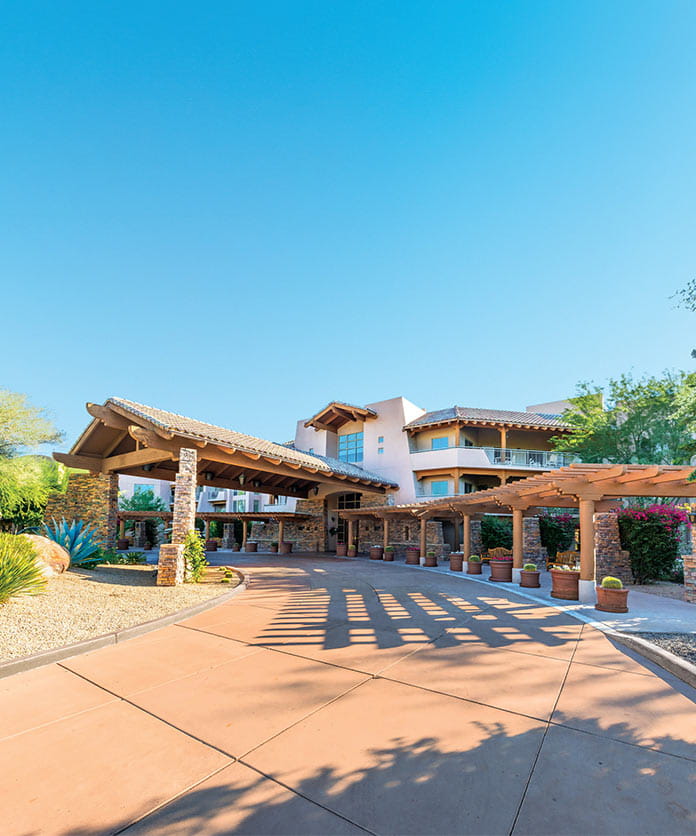