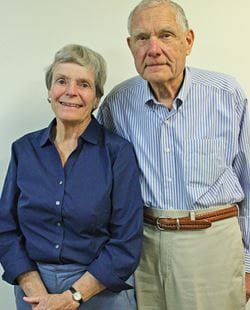 New Vi at Palo Alto residents Steve and Beverly Docter were on the waiting list for four years before receiving the call that a Sonoma apartment had become available for their consideration. Since there was no sense of urgency while on the Vi at Palo Alto waitlist, the Docters were able to take a slow, thoughtful approach to downsizing their home.

“We knew someday we would be making the move, and we didn’t know what size apartment we would end up in,” said Mr. Docter. “Slowly over the years we would give away items to our family and friends. A set of dishes here, or a set of glasses there. Since there was no rush, we could enjoy the process of selecting who would get what.”

Ready When Opportunity Knocks
When they finally got the opportunity to move into Vi at Palo Alto, the Docters were ready to accelerate their downsizing process. “We became very familiar with organizations like Goodwill, Habitat for Humanity, and Ecumenical Hunger Program,” Steve said. “The Menlo Park library got boxes and boxes of books from us. We parceled out rugs and furniture to our kids. A lot of folks got gifts from us!”

According to the Docters, it was a process that didn’t magically happen overnight. It took time and planning, but thankfully it was a change they saw coming and were able to manage. “It’s amazing the amount of stuff you acquire over the years! When you have the space, you put something in there and forget all about it,” said Mr. Docter. “We had an extensive area in our townhouse where we kept stuff that we probably should have gotten rid of years ago.”

Balancing Sentimentality with Need
In additional to the logistical challenge of downsizing their current home to their new, one-bedroom plus den home, the Docters had to manage the emotional toll of parting with many of their possessions. “Over time I became more ready, willing and able to get rid of many things except my checkbook, my favorite tie and my toothbrush,” said Mr. Docter. “Bev was more emotionally tied to various household and personal items, but she’s a trooper and knew it had to be done for the greater good of starting a new life here at Vi at Palo Alto. She got out some paper and made a map of where everything could fit. She did a fabulous job of deciding what we could take with us. We were able to bring some sentimental things with us, like a chair with fabric needlepointed by her grandmother.”

According to Mr. Docter, the tear-jerking moments were balanced by the knowledge that their belongings would be put to good use by people who needed them. “If they were just going to be thrown out it might have been sad, but by donating we knew that they were going to go to people who hopefully would enjoy them and put them to good use.”

Enjoying a Simplified, Meaningful Space
Now that the Docters have settled into their new home at Vi at Palo Alto, they are focused on enjoying what they have. “We didn’t want our new home to be cluttered with too many things. Now that we’re in and the pictures are hung, the books are put away and the few sculptures are sitting in the corner - we’re happy!”