Positively Presidential: The Vi at Lakeside Village Past Presidents Club 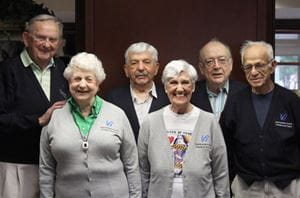 In true Vi at Lakeside Village form, however, when a resident council President’s term in office comes to an end, their service to the community does not.  In fact, these past presidents have worked together to create a new group, the Past Presidents Club.

The sole purpose of the club is for its members to find new ways to employ their collective knowledge and leadership experience in service to the community they call home.

One of the primary duties of the past presidents is to welcome new residents to the community by taking turns delivering welcome bags to new residents.

“We want them to feel right at home,” said Al Levy, two-term resident council president, founder of the Past Presidents Club, and 12-year resident of Vi at Lakeside Village.

During this visit they answer questions, extend invitations to dinner and coffee, and introduce their new neighbors to some of the social opportunities available within the community.

“We want to help them get the most out of what they enjoy. One of my favorite welcome stories was when I was talking to a new resident named Shirley, when along came this other resident who was also named Shirley. So I said, ‘Shirley, meet Shirley!’” laughed Al. “Then just today I saw them both talking in the lobby. Those introductions really matter!”

The new residents appreciate these welcoming interactions with the in-the-know council members who understand what it feels like to be the new kid on the block.

“It brings a sense of excitement and hopefulness over the possibilities of making new friends amongst their Lakeside Village neighbors,” said Donna Addy, Community Relations Manager, Vi at Lakeside Village.

The rewards of giving back

All the past presidents volunteer their time to help the community, and the satisfaction they feel in helping others is its own reward.

“This community has been good to me and my family, and we owe something back to the community,” said Al.

Being that friendly, recognizable face for new residents has also made an impact on Ruth Manishin, resident council president from 2017 to 2018.

“It’s such a pleasure to help. I’ve had residents call and say thank you and how much it meant to have gotten the goodie bag and know there was a friend they could call here,” she shared.

The members of the Past Presidents Club have set an example for service that has impacted the entire community.

“Vi at Lakeside Village is a warm, welcoming place,” said Carole Agud, resident council president from 2016 to 2017 and Past Presidents Club member. “We want everyone to know that if you want to take part, you can,” she added.

The past presidents hope that by offering a warm welcome to each new resident, those residents will do the same for others when their time comes.