Julian Greenspan: Making a business out of a childhood hobby

Julian Greenspan began visiting Miami when he was eight years old, spending vacations with his grandparents in their rental home. Eighty years later, he calls Vi at Aventura, near Miami, home.

“There’s a mixed crowd here and I like to talk to people and just enjoy being with everyone,” said Greenspan. “I don’t mind having dinner with someone different every night.” 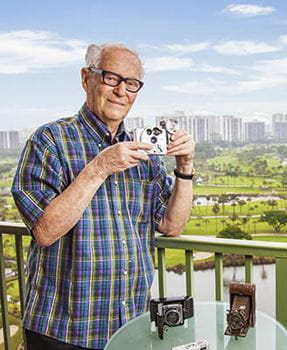 Growing up, Greenspan spent most of his time in and around New York City, where one of his favorite hobbies was photography.

“When I was around 10 years old, my uncle gave me my first Graflex camera, one of those where you wind the picture, get one shot and turn it over,” he said.

After that, his mother’s bridge club pitched in $1 each to buy a 35mm camera.

“It just always came naturally to me, he said. “I just picked it up.”

Greenspan’s hobby would continue through high school. Following graduation, he enlisted in the Army where his hobby took on a new twist.

“As an Army photographer, I took pictures of warfare and government equipment at Fort Knox. I even had the opportunity to be the personal photographer for 4-star general Jacob Devers, but I passed it up to go to college,” he said.

Though he never considered himself a professional photographer, Greenspan loved taking photos, and even had a dark room in his New York home for many years. At age 29, Greenspan decided to turn his lifelong passion into a career: “I kept thinking about what I really loved and decided to start a business in photography stores.”

Greenspan started from scratch, selling his stocks and borrowing money to open three JD Camera Exchange stores in Midtown Manhattan. He would spend the next 45 years dealing in used camera equipment, an uncommon craft for the time.

“I loved the work and earned accounts with corporations, auction houses and art agencies like Sotheby’s, Christie’s and Grey Advertising. I worked with top lines like Kodak, Polaroid and Nikon. It just kept progressing,” he said.

Soon, large companies recognized his knowledge and skill and sent him on incentive trips to Germany, Hawaii, and Thailand to entertain him and gain their business. Some of his favorite personal clients include Jackie Onassis Kennedy, and artist and writer Peter Beard.

“We would socialize inside and outside of the stores,” said Greenspan.

With the dawn of the digital age in the late 1990s and the passing of his first, and then second, wife, Greenspan decided to dissolve the businesses and retire at age 72.

Recalling his childhood vacations, he started visiting Miami again. Eventually, he bought a home in South Beach, Fla., but kept his New York City apartment in Midtown, where he stays when he visits his family for two months each year.

In 2013, Greenspan decided it was time to move once again, this time choosing Vi at Aventura.

“I did some research and decided I wanted to be with people my own age,” he said.

Greenspan has kept a collection of more than 100 vintage cameras in his Vi at Aventura home. His favorite camera is an 8x10 view camera that belonged to former governor of New York, Alfred E. Smith. Smith’s grandson, a friend of Greenspan’s, gave him the 1890 camera as a centerpiece.

“It has revolving backs, tilts and extensions,” he said. “It’s a beautiful piece of furniture.”