“Right-Sizing” For A New Life at Vi at Highlands Ranch 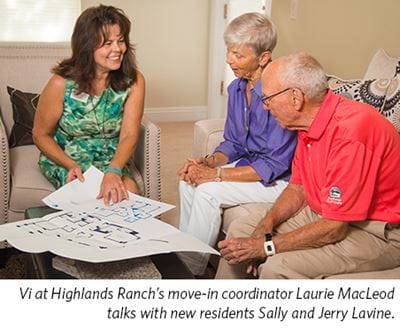 When Jerry and Sally Lavine relocated in December 2015 from their home in warm, sunny Texas to Vi at Highlands Ranch, the weather was the most noticeable change.

“It snowed the day we moved in,” Mrs. Lavine said. “It was a winter wonderland!”

But the move brought many other big changes for the couple, including one that took place over several months: the process of whittling a lifetime of possessions in their 3,600-square-foot home down to a collection that would fit into their new 1,300-square-foot apartment.

According to Nicole Pollard, Sales Director for Vi at Highlands Ranch, this process of “right sizing” is something nearly all new residents go through as they prepare to make the transition to the community.

“‘Downsizing’ sounds so intimidating,” Pollard said. “Residents laugh when we use the term ‘right-sizing,’ but it just means doing what makes sense for them during this phase of their lives. It’s a challenge, but most embrace it.”.
Preparing to Make the Move
Selecting what items to keep presented some difficult decisions for the Lavine’s, as did figuring out where items that didn’t make the cut would go.

Mrs. Lavine says most of the bigger items — furniture in particular — went to nearby family and friends, smaller items like books and artwork to local organizations.

“Every month we would go to town with a load of stuff in the car to take to the library, or thrift store,” Mrs. Lavine said.

One of the hardest things to part with: Mr. Lavine’s tools.

“Jerry had a workshop in our garage, and we knew we just couldn’t bring all those tools with us,” Mrs. Lavine said. “They were hard for him to give up, but they went to a wonderful home: Two of his friends came over one weekend and loaded everything up.”

Making the difficult decisions of what to keep and leave behind ultimately make residents’ apartments a truly special place, said Pollard.

“Each and every thing in our residents’ apartments are precious to them,” Pollard said.
“They value what they have even more because the items they’ve kept are truly a reflection of who they are.”.

Working With a Move Manager
Once the Lavine’s chose Vi as their new home, they worked with a professional move manager that the Vi sales staff helped them find.

Move managers can assist residents on either end of the move, doing everything from arranging estate sales or coordinating charitable donations before the move, or creating a floor plan and physically setting up the space during move-in.

“For a lot of our new residents, move managers are a godsend!” Pollard said. “They eliminate a lot of the stress and feelings of being overwhelmed.”

Laurie MacLeod, Vi at Highlands Ranch’s move-in coordinator, says about 85 percent of residents end up hiring a move manager to assist in their transition. Those who don’t often live among boxes in unfinished spaces for too long, and MacLeod thinks residents deserve to feel settled in right away.

“We’d like them to arrive in a finished space,” MacLeod said. “Our new residents should be able to go into their apartment that first night, sleep in their own bed and have all their belongings in the right places.”

Hiring a move manager was the right choice for the Lavines: The crews unpacked all the boxes, arranged the furniture, and took away all the paper and trash; a week later, their move manager even came back and helped Mrs. Lavine hang pictures.


Home Is Where The Heart Is
After the “right-sizing” decisions were made and the long-distance move was complete, the fun part arrived for the Lavine’s: turning their new apartment into a home.

Mrs. Lavine got a lot of ideas for decorating and arranging the new apartment from some new friends, a couple they met at Vi at Highlands Ranch who made a similar move from Texas. She got plenty of storage tips, as well as inspiration to lay a favorite Oriental rug over the apartment’s existing carpeting.

New friends and a sense of community all foster a strong sense of home, Pollard says — sometimes more so than the physical items inside residents’ apartments.

“Our residents, all in all, are so pleased that you don’t really hear them saying things like, ‘I miss my china hutch,’” Pollard said. “They benefit so much from the lifestyle and socialization that they often forget how important they thought those items were before they moved.”

Today, the Lavines’ home is a comfortable, cheerful place to live, with plenty of reminders of their long, happy life in Texas. While the couple sometimes miss their Texas home, Mrs. Lavine never doubts that they made the right decision.

“Our kitchen had glass windows all across the back, and I could see the lake from my big kitchen table. In my new kitchen at Vi, I put up a picture that a friend water colored,” she said. “It’s a Texas scene with live oak tree, Indian paintbrush, bluebonnets, a Texas flag, and a windmill. Every time I look at it, I don’t even feel like I’ve left.”