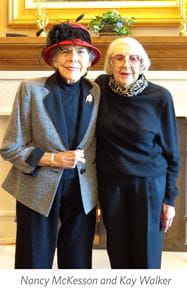 In the 1950s, Nancy McKesson and Kay Walker took turns taking their children to a playgroup near their homes in San Tome, Venezuela. Today, they have dinner together and attend lectures at Vi at Highlands Ranch in Colorado, where they were recently and unwittingly reunited.

“I was pretty shocked to see her when I was returning a cart from grocery shopping,” said Walker. “When Nancy called my name, I just couldn’t believe it! I gave her a big hug.” It has been 60 years since the women saw one another.

Laurie MacLeod, Move-in Coordinator at Vi at Highlands Ranch, was giving new resident Nancy McKesson a tour when the two recognized each other in the hallway. “They were both so excited to see one another,” she said. “It’s kind of like the first day of school when you’re a new resident at Vi. All of the residents are wonderful and friendly, but this was an extra special welcoming.”

“It was a very warm reunion after all these years,” said McKesson. “It was just a lovely, warm feeling. Since I’ve been here, Kay has been very sweet in introducing me to people.”

McKesson first moved to Venezuela when she was 17 to live with some of her family for a summer. “It was a wonderful life down there. The climate was beautiful, and life was good.” While in Venezuela, she met and began dating her husband Chuck. Several years later after she had moved back to her hometown in Mississippi, Chuck came to visit and proposed. She then rejoined him in Venezuela, and that’s when she met Kay Walker. It was 1950 and the two women were both attending a camp for Americans living overseas.

“The camp brought us all together,” said Walker. “Your friends down there became your family and you did most everything together.”

During their time in Venezuela, Walker and McKesson would join each other for birthdays and holidays, host dinners and attend company parties. There were clubs for everyone to enjoy swimming, tennis, and bowling, as well as a church and hospital on campus.

Though they went their separate ways after leaving Venezuela, they kept up with each other’s lives through mutual friends.

Now, both are part of the Vi family. McKesson moved to the Denver-metro community in November 2015 after living in Austin, Texas for 35 years and chose Vi at Highlands Ranch because of its respect within the community and proximity to her son. Walker moved in September 2008 when the community first opened. Avid skiers, she and her late husband traveled between Denver and Houston for years. Together, they chose Vi at Highlands Ranch because of the location and amenities. “He decided on the unit. I am very fortunate that he had good taste. I’m not sure I would have picked so well!” said Walker.

Although the two live in separate buildings, they meet for dinner and cocktail hour, and enjoy activities and socializing together with the other residents.

“I have made wonderful friends here,” said Walker.  “My family has been here and they love it too. Many say we have the best restaurant in town!”

McKesson and Walker are looking forward to the days ahead. They even plan to bring their sons together at Vi at Highlands Ranch for a reunion of their own.