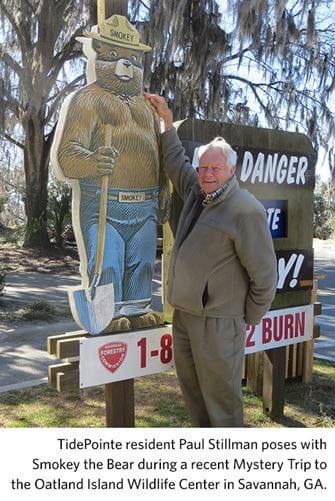 About five years ago, employees from TidePointe, a Vi community were meeting to brainstorm new resident activities. They wanted to shake things up – alter the routine activities they were planning month after month. It was then that the idea of a “mystery trip” was born – and the team has been delighting and surprising residents ever since.

“When residents sign up for a mystery trip, they board the bus and don’t know if they’re going to be riding for five minutes or an hour and five minutes,” said Diane Kastler, Lifestyle Director of TidePointe, a Vi Community. “They have no idea what lies ahead, and that’s exciting!”

Dr. Chuck Miller, who has lived at TidePointe for about three years, has been on many mystery trips since moving to the community. He says the trips are a great way to get to know fellow residents, as well as the areas surrounding the community.

“There is a sense of happy anticipation when we get on the bus,” Miller said. “We all try to guess where we’re going to go.”

Catering To A Diverse Membership
Kastler arranges about 10 mystery trips every year for residents. Each trip starts in the morning and usually ends sometime in the afternoon – lunch is provided along the way. Previous mystery trips have included everything from semi-traditional activities like winery tours, to the less ordinary: a behind-the-scenes look at firefighter training; a tour of a nearby wastewater plant; or a walk through Beaufort National Cemetery.

Another trip was a visit to a local museum that also included a Revolutionary War re-enactment. “One of the actors handed everyone a wooden ‘musket’ and separated them into revolutionaries, French militia, Indians and the British,” Kastler said. “Then he taught everyone about the little-known Revolutionary War battles that took place in South Carolina and Georgia.”

Creating memories
According to Kastler, one of the first mystery trips is still one of the fondest: a trip to the Kazoobie Kazoo Factory in Beaufort, S.C.

“The residents came back from the trip and immediately began planning ways to show off their new kazoo skills,” Kastler said. “It’s been several years and we still have a kazoo orchestra here at TidePointe!”

Clamoring For Adventure
Kastler says she and her staff come up with most of the ideas for the mystery trips themselves, but she’s also received inspiration from the trips’ bus drivers as well as from TidePointe residents themselves.

“Sometimes a member will pull me aside and whisper, ‘I have an idea for a mystery trip,’” Kastler said. After conspiratorially closing the door behind them, Kastler takes their suggestions under consideration. “As soon as the monthly newsletter goes out, residents rally around the sign-up sheet — it’s filled to capacity within an hour!” Kastler said. “And we’ll have just as many on a waiting list.”

Miller says the high demand for the mystery trips are a testament to the sense of adventure in so many TidePointe residents. “I cannot speak too highly of this community — Diane and her team plan so many activities for us,” he said. “You really can be as busy as you want to be.”