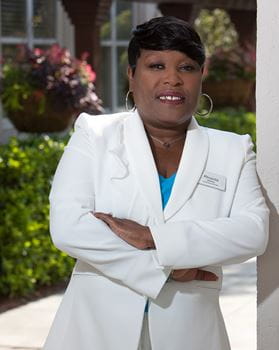 Caring for people comes naturally for Rhonda Ashby, who has been on TidePointe, a Vi community’s housekeeping staff since 1996.

Her mother raised her in a loving household, where she was taught to treat others as she wanted to be treated. When she and her sisters were grown, one of her sisters became a certified nursing assistant, another a professional caregiver. Ashby became a housekeeper.

Years after Ashby left home to begin her career, her mother had a stroke and was later diagnosed with Alzheimer’s. As her mother’s health sharply declined, Ashby stepped up.

“If I wasn’t working, I was there. I’d wash her, bathe her, do her hair. I helped her out until she left this world,” she said. “I was the baby of the family, so she expected me to be there — but I’d have done it anyway.”

Ashby’s first housekeeping job was at Haig Point on nearby Daufuskie Island. From the start, she loved the work — but when she heard about a life-care community opening on Hilton Head Island, she rushed to apply.

On July 17, 1996 — a date she remembers clearly — Ashby interviewed for her first position at TidePointe and was hired on the spot. She began as a housekeeper and was promoted to supervisor after three years. And finally, in 2013, she was promoted to housekeeping manager, where she has remained ever since.

Even early on, Ashby proved herself to be a stellar TidePointe employee: In January 1997, shortly after the community opened its doors, she was awarded Employee of the Year. Even in the first few months of her job as a housekeeper, she brought her “A game” each day.

“We didn’t have many employees at that point, so from day to day I’d be working at the spa, the veranda, the cottages, the care center, the clubhouse…” she said. “They had me run all over!”

But she completed every task with a smile on her face, committed to doing her best every day — and Vi rewarded her for that, she said. “You do what you have to do to get the job done,” she said.

David Chidboy, TidePointe’s director of engineering, has known Rhonda since the day she was hired — and says she has remained dedicated to the work ever since.

“It doesn’t get any more personal than going into a person’s home to care for it,” he said. “She understands how important that is, and she takes the job seriously. Rhonda really cares about what she does, and she does a great job.”

Since her promotion to housekeeping manager, Ashby oversees TidePointe’s entire housekeeping staff, and she leads by example every day, Chidboy said.

“She leads from the front…everyone learns how to work properly and quickly by watching her,” he said. “There’s no part of this job she hasn’t physically done herself. She’ll still jump in and do what needs to be done,” he said.

Ashby has been a tireless employee since joining the TidePointe staff 21 years ago — and, like her own mother before her, is a loving mother and wife when she’s not at work. She lives with her husband, an 8-year-old son, and a 30-year-old son with special needs; the couple also has a 21-year-old daughter, a medical assistant, who lives nearby.

She leaves the house before 7 a.m. every day to make the hour-long drive to Hilton Head for work.

In addition to her love for serving TidePointe’s residents, Ashby believes her role in housekeeping is woven tightly into the fabric of TidePointe’s success — something she tries to instill in the employees she manages each day in her department.

“Housekeeping is so important,” Ashby said. “We’re all here to give excellent service to our residents, with compassion and integrity.”