Dr. Arthur A. Dugoni: renowned leader in the field of dentistry 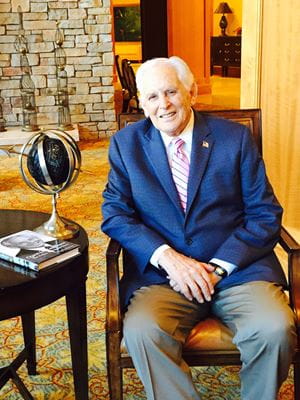 Vi at Palo Alto resident Dr. Arthur A. Dugoni is a renowned leader in the field of dentistry and dental education. The namesake for the Arthur A. Dugoni School of Dentistry at the University of the Pacific, he was its dean for 28 years. He is a self-described team player.
From the academic to the political, Dr. Dugoni positioned himself for leadership. Starting as student body president in dental  school, Dr. Dugoni went  on to become  president of the American  Dental Association, American  Dental Education Association, the American  Dental Association  Foundation and the California  Dental Association, and has received countless honors and awards for his contributions to the dental  profession and dental  education including being elected to the FDI (World  Dental Federation ) list – an honor limited to 30 people worldwide, and the Federations highest honor.

As Dean emeritus and professor of Orthodontics of the dental school at the University of the Pacific, Dr. Dugoni became the first person to have a dental school named after him while still in office. Born and raised in San Francisco, Dr. Dugoni now lives at Vi at Palo Alto with his wife of 66 years, Kaye Dugoni. Here, we speak to Dr. Dugoni and learn more about his career, and his life in Palo Alto.

Tell us about your Italian-American upbringing in San Francisco
My great-great-grandmother had 13 children and almost all lived on the same street in an Italian neighborhood now known as Russian Hill. Everybody on that street was Italian - the butcher, the cleaner, the shop keepers. I grew up thinking everybody was Italian! My grandfather was a chef and on Saturday he would cook all day, then on Sunday everyone on the street would come over for dinner. After a four hour dinner, we all went into a large dining room and all the children sat on the floor and the adults sat around the table, and led by my grandfather we would sing Italian operas such as “Verdi and La Traviata.” As a young first grader, I only spoke Italian and that was causing poor grades. So my father instructed the family that we would only speak English in our homes from then on.

You are credited with creating the humanistic approach to dental education. What does that mean?
During my presidency of the ADA Foundation, there was a survey conducted where the vast majority of students, around 80%, said they disliked their dental school experience. They did not respect or care for the model under which they were educated. The old model was punitive and didn't build self-worth. The old model said, “Look to your left, look to your right, one of you won't be here by the end of the year.” When I became dean, I said, “Look to your left, look to your right, these are going to be your friends and colleagues for the rest of your life.”

Education should be inspiring; it should be the best experience of one’s life. I wanted to create an attitude and a culture in which people love their school and are thrilled to be there. This approach worked. Our goal was to build a model where young men and women would say, “this was the most difficult time in my life, it was demanding, but it brought out the best in me and I'd do it over again in a heartbeat.”

What made your tenure as Dean so unique?
We created a culture of family. We called it the humanistic model based upon trust and respect for everyone and at every level. I think it goes back to my grandpa and what he established in those Sunday dinners, bringing all those people together. Kaye and I used to host barbecues at my house and invite everyone - faculty, staff and students. I believe that as an educator you must not only be a teacher but you must be a coach and mentor and help people grow beyond their wildest dreams; and if we fail to grow students as people, then we have failed as educators. When I was dean, I used to say, “at the school of dentistry, we grow people, and along the way they happen to become doctors.”

How does it feel to have a dental school named after you?
It was totally unexpected. No dental school had ever been named after anyone who was still alive. I had been on the faculty over 60 years and Dean for 28. It was quite an emotional moment! The university put on an extravaganza to mark the occasion. Several thousand people came out for the naming including Deans and educators from most of the dental schools, academic and political leaders nationally and internationally. We had the dedication and program with the famous Dave Brubeck Quartet, and my then 17-year-old grandson sang. Today my grandson is a star of the number one musical on Broadway, “The Book of Mormon.”

Tell us about your life in retirement at Vi at Palo Alto.
I still work for the dental school as a part of the faculty and development team, helping to raise money to support our people, programs and our brand new dental school facility in downtown San Francisco. I also give lectures and teach leadership courses. Even at 90 I just wrote a strategic plan for the school.

This past year, the school published a new biography "Quest for Excellence: The Arthur A. Dugoni Story" as a way to share stories about my life and career. It was an honor to be part of this project and to share more of my perspectives and life history.

Travelling and spending time with family also keeps me busy. Kaye and I have a big family - 7 kids, 15 grandkids and 6 great-grandkids. Kaye is now in the skilled nursing facility here at Vi at Palo Alto, and I spend five hours with her every evening there. She is still the most beautiful woman I have ever seen in my life.